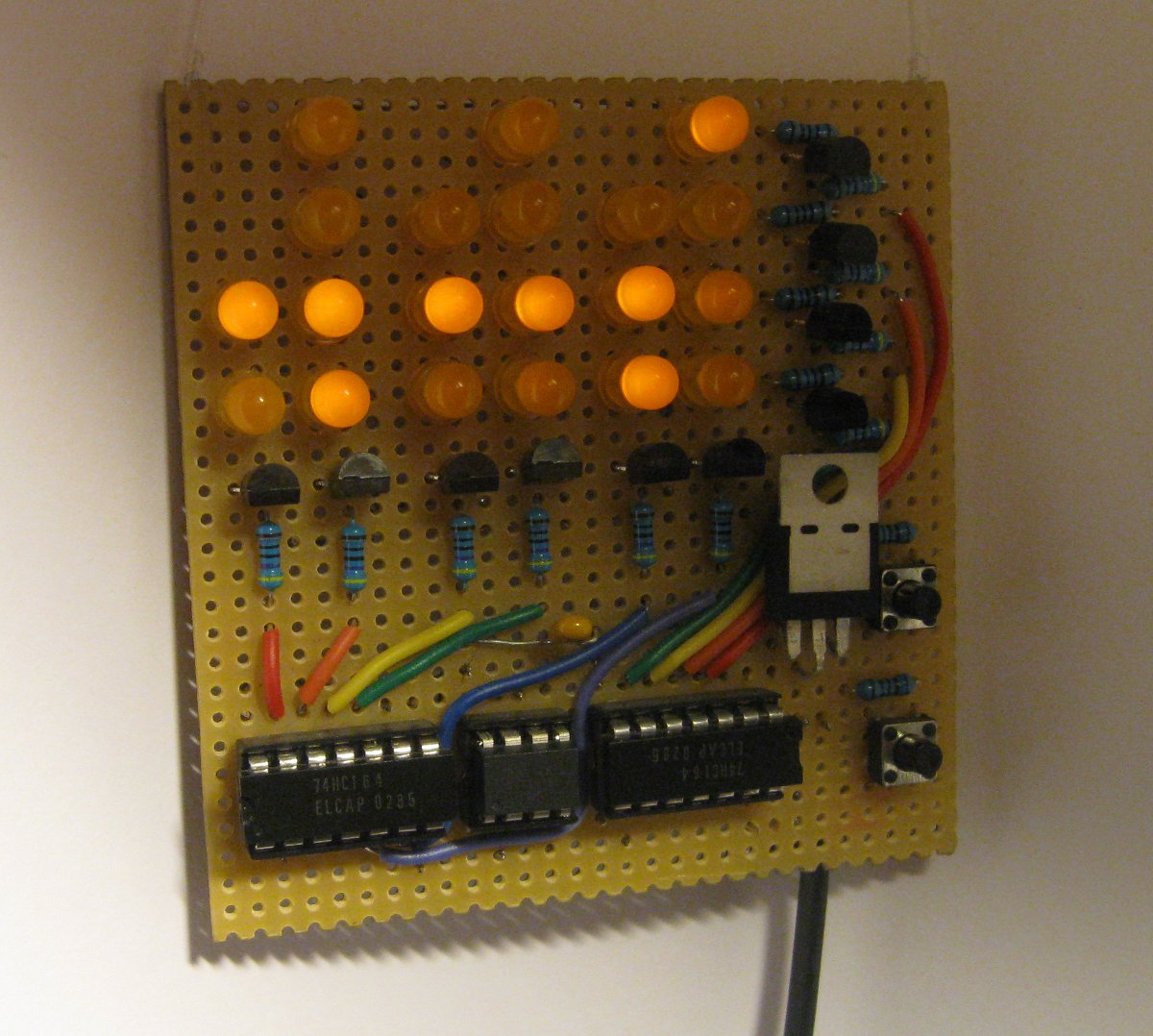 Here is my schematic and code for a very basic binary coded decimal clock.

I took up this project after seeing few binary clocks on Instructables.com as fun way to introduce myself to shift registers and Arduino interrupts. This totally paid off. Also it was a nice challenge in coding at the time (two years back, I think). I did not do much research about coding clocks, so there might be funny things in it.

It ended up as ATtiny project with the method described at highlowtech.org that lets you turn an Arduino into a programmer device for some ATtiny controllers.

What is a binary clock?

This particular kind of binary clock uses a mix of decimal and binary notation. It puts out the time so that first column of LEDs from the left represents tens of hours, next one ones of hours, then tens of minutes, ones of minutes, tens of seconds, ones of seconds. Each column is a binary notation with the bottom LED being the least significant bit or smallest number ... I'll explain in a moment. Lit LED means 1, unlit means 0. Now the least significant bit thing means that when only the bottom LED is lit, the value is 0001 or simply 1 which clearly equals 1 in decimal system also. When two bottom LEDs are lit, the value is 0011 or 11 which equals 3 in decimal. And so on. But I guess wikipedia is better at explaining it.

The clock uses two 74HC164N shift registers for driving the LEDs through transistors. It's a POV (persistence of vision) device. Meaning that only one column of LEDs is lit at a time and they are switched fast. One shift register outputs the value that needs to be output to a column and the other selects the currently active column. ATtiny85 has 5 I/O pins (6 if you have access to high voltage programmer device and are willing to sacrifice reset pin). Each shift register needs two pins so I had to make funny voltage divider and analogRead to attach two buttons to the last pin left. I also made a small library to take care of that ... but then found out that it does not work (because of millis() ) on this specific project. Well, I made a modification and crammed it all in the code of this sketch.

There is no external crystal, the ATtiny's internal clock is used. It does not come super calibrated. Therefore the idea is to observe how much the clock goes off per x amount of time and tweak the number of interrupts that is counted as a second. The default is 2500 because that's the Hz value of the interrupts, but I can make it count up to 2292 instead and call that a second.

I used an old 7.5V phone charger and 7805 voltage regulator to power the thing because that amount of LEDs can drain a battery too fast. The downside is that if there is a power outage the timekeeping is lost. On the schematic I drew a pullup resistor and button on the reset pin. It's ought to be there, but on my pictures and in reality it's not - for some funny reason the floating reset does not get randomly triggered unless I touch it. I just cut off the power to reset the thing when I want to set time.

When the ATtiny resets it starts to wait for button input to set the clock. Pressing button1 increases the value of minutes by one. When button2 is pressed first time then following presses on button1 will start to increase hours. When button2 is pressed second time it ends the time setting and starts the clock. To adjust the time one has to reset the controller and start setting from beginning. It's very basic as I said.

Counting and outputting value on the LED POV screen is handeled with timer interrupts. ATtiny has them slightly different than Arduino, but very similar. A good tutorial on timer interrupts is this instructable. I actually first coded the thing on Arduino because you can troubleshoot it with serial monitor and once I got working code, converted it for ATtiny85. (But I have made some important fixes in the AtTiny code only, so the Arduino version is not up to date enough to post that one.)

Interacting with shift registers is done with direct port manipulation because digitalRead is too slow compound function, it caused some trouble.

Specifically what happened with my AnalogDebounced library is that found out I can't use millis() while ATtiny85's timer0 is used for interrupts. The solution was a modification where instead of comparing millis() increase I count some number of loops that read same button value. You can see the result in the code below, near the beginning of sketch there is a class that does it. 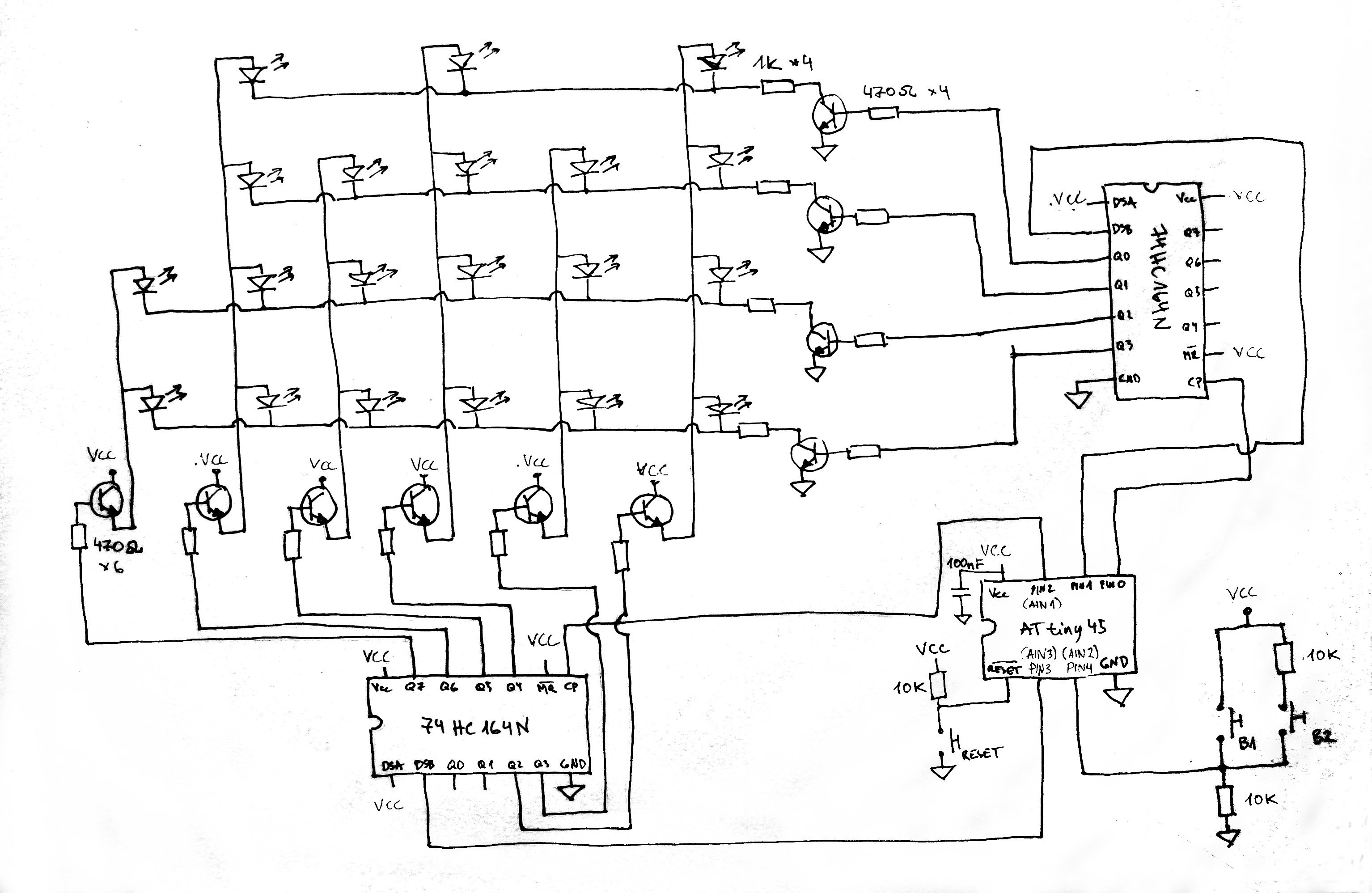 And here's the code for those who are looking for some tiny piece of example on something.